Finnvera has a large number of both domestic and foreign stakeholders that influence Finnvera’s operations or vice versa. The objectives of stakeholder dialogue are recognisability, coherence and an active approach. Finnvera discusses actively, among others, with clients, the personnel, cooperation partners, banks and organisations. Valuable feedback is received through these channels. This feedback can be used to develop financing services meeting the needs of enterprises even better. Interaction has been particularly close with actors in the Team Finland network, and Finnvera will move to joint premises with them in 2016.

Representing the clientele and the other key stakeholders, the Finnvera Committee serves as an interaction channel between clients and the company. The committee meets two to three times per year. Export Financing also has its own committee which ensures that the experience, know-how and competitive edge of Finnvera’s Export Financing are available to Finnish export companies.

Finnvera cooperates with numerous organisations in Finland. These include the Federation of Finnish Enterprises, the Finnish Family Firms Association, and the Confederation of Finnish Industries. Cooperation with bodies such as banks and other providers of financing is particularly close. The goal is to increase knowledge of Finnvera and to promote the acquisition of clients and demand for financing.

Finnvera has defined the key corporate responsibility issues associated with stakeholders expectations and their impact on Finnveras business. The evaluation conducted in cooperation with experts from PwC was based on feedback from client and stakeholder surveys, interviews of the Chairman of the Board of Directors and the senior management, and on the findings of a workshop.

No new corporate responsibility themes have arisen in stakeholder interaction during the past year. 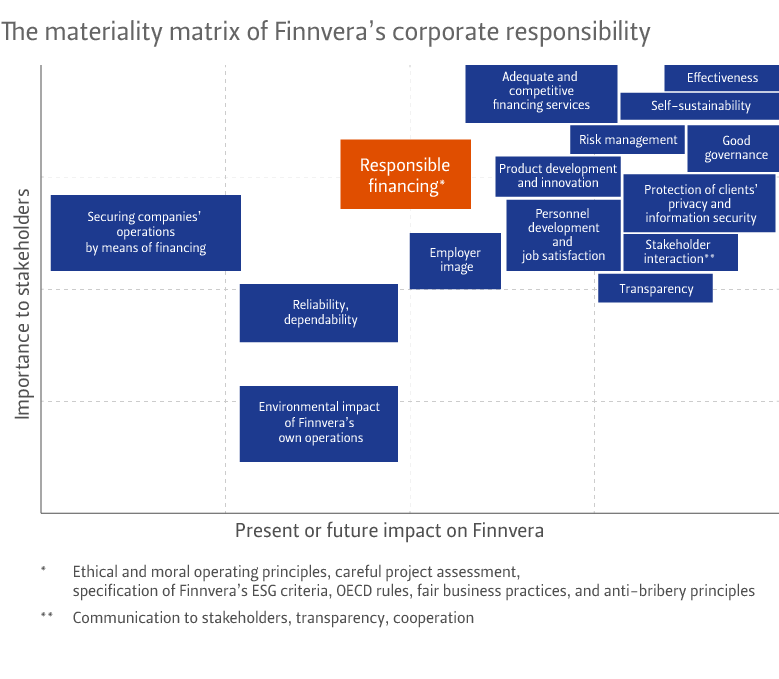