The purpose of Finnvera’s export financing is to promote Finnish companies’ opportunities to engage in export trade. Finnvera offers internationally competitive services to export companies and banks financing exports: export credit guarantees to cover export and project risks, the financing and interest equalisation of export credits, and export credit insurance for exports with a short repayment period. Guarantees can be used to minimise political and commercial risks arising from exports, thereby improving the financing options available for export transactions.

Export credits and export credit guarantees are subject to international regulations. The OECD Arrangement sets guidelines for officially supported export credits that have a repayment term of two years or longer. The guidelines concern, for instance, the share of cash payment and the repayment period. Separate regulations have been set for certain sectors and projects, such as ship credits and renewable energy sector credits. Finnvera investigates the creditworthiness of the buyers and the buyers’ country in each case. Precondition for granting guarantees or financing is that the transaction to be financed benefits the Finnish economy.

Finnvera grants guarantees for high-risk countries and investigates the creditworthiness of buyers and guarantors.

The export credit guarantees granted by Finnvera do not include financial support. Clients pay a premium that depends on the risk associated with the project.

At the end of 2014, outstanding commitments for Finnvera’s export credit guarantees and special guarantees totalled EUR 12.2 billion, or 17 per cent more than the year before. Since 2010, the total outstanding commitments for export financing have increased by 41 per cent. This increase is the result of the international financial market crisis, bank regulation, tougher international competition between exporters, and the large shipbuilding contracts signed during the year under review.

The maximum amount of export credit guarantees and special guarantees was raised from EUR 12.5 billion to EUR 17 billion during the year. This will secure Finnvera’s opportunities to contribute to the financial arrangements of Finnish companies’ export deals.

Export credit financing facilitates the arrangement of financing for foreign customers who purchase Finnish capital goods. Banks play a key role in arranging financing for export transactions: the bank selected by the buyer arranges a long-term export credit on OECD terms for the client. The bank negotiates a credit agreement that meets the terms of Finnvera and Finnish Export Credit and manages the credit. The bank transfers the export credit to Finnish Export Credit for financing. Finnvera's Buyer Credit Guarantee is always a prerequisite for the financing. 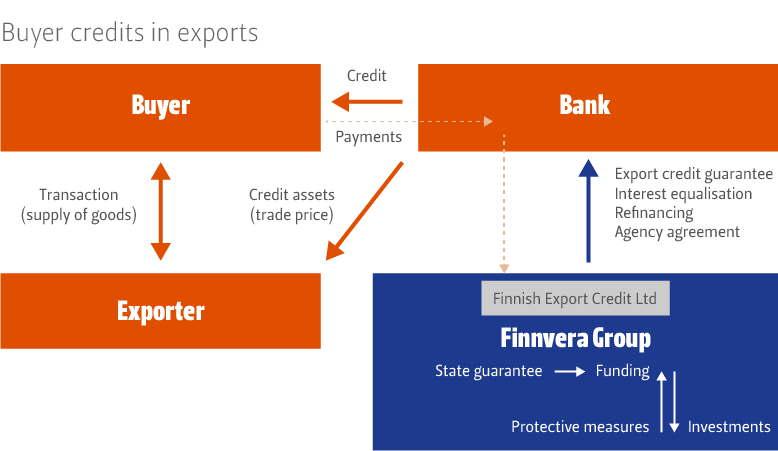 The volume of offers for export credit guarantees increased

Although the volume of applications for export financing declined, the volume of guarantee offers given increased by about half on the previous year.

The total value of the export credit guarantee and special guarantee offers given by Finnvera rose to EUR 5.0 billion (3.3 billion).

In total, 88 per cent of the guarantees offered concerned the traditional sectors of Finnish capital goods exports, such as shipbuilding, telecommunications and the forest industry. Compared to the previous year, the most rapid growth took place in offers given for exports to industrialised countries and Latin American countries. Their combined share was 86 per cent. The largest volumes of guarantees were offered for the United States, Finland and Germany.

The value of guarantees that came into effect in 2014 totalled EUR 4.0 billion (2.7 billion). Most of them, or 94 per cent, pertained to foreign risk-taking. No significant changes in the number or size of projects or in the clientele took place during the year.

Large Finnish industrial enterprises are now able to receive export credit guarantees for long-term credits that banks grant for domestic investments. The projects must create export industry or bring benefit to it. The legislative amendment entered into force on 1 September 2014.

After the amendment, Finnvera can participate in financing arrangements for investments made in Finland to benefit exports. This improves Finnish companies’ equal competitive standing when offering their products for export-industry investments implemented in Finland.

"We have not previously been able to grant guarantees for the domestic projects of large enterprises. It has been more advantageous to purchase machines and equipment needed for a project from a foreign supplier, because then the buyer has been able to use an export credit guarantee given by the export credit agency of the supplier’s country. As a result, Finnish equipment suppliers may have lost deals to their competitors. Our possibilities to grant export credit guarantees for domestic transactions will strengthen the competitive standing of equipment suppliers and will promote employment in Finland." 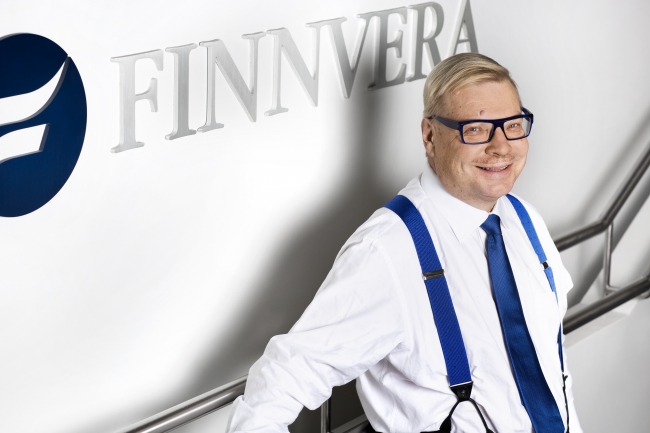 Finnvera’s mission is to provide Finnish export enterprises with competitive export financing services. This requires continuous development of operations. Guarantees granted for export-related domestic investments were taken into use in 2014. Also during the period under review, a proposal for refinancing guarantees was prepared for the Government. The proposal is being debated by Parliament and a decision is expected during 2015. The possibility to finance small export credits was also investigated during the period under review.